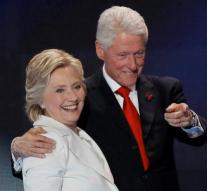 - "Not only Hillary Clinton, but also her husband and daughter are completely separate from the main part of their charitable foundation as Clinton wins the presidential election in November. With that announcement the Clintons hope now to be able to counter the persistent allegations of conflict of interest."

"The AIDS project of the Clinton Foundation, the flagship of the foundation and account for two-thirds of its expenses, is completely independent as Hillary White House involves. Bill and Chelsea Clinton and all confidants of the family resign as board member and the project carries a different name in the future, the foundation announced Wednesday."