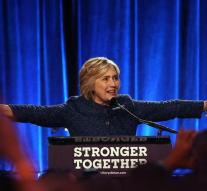 - "Hillary Clinton regrets that she has shaved over a comb so much of the support for Donald Trump. The Democratic presidential candidate said Friday that half of trumps supporters \"unfortunate\" people who are homophobic, racist and sexist notions on hold after."

"\"I spoke last night too generalized and that is never a good idea,\" said a statement from Clinton. \"I'm sorry I said 'half', that was wrong. \""

"Although she takes back part of its definition, Clinton stressed that they will not fail in the near future to appoint as such racist and bigoted statements."