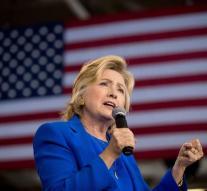 - "US presidential candidate Hillary Clinton will Thursday resume its election campaign. So says one of her campaign staff."

"Clinton is recovering from pneumonia. In commemorating the attack on the Twin Towers on September 11 she became ill and had to leave. First, her campaign said it was because of the heat, later gave her doctor that pneumonia was the cause."