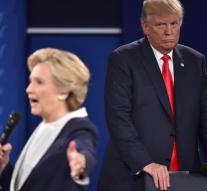 - Hillary Clinton knows at present 47 percent of Americans behind, while her Republican rival for the presidency of the United States Donald Trump gets 43 percent of the vote.

According to a major survey of the newspaper The Washington Post and the ABC broadcast, held after the second major debate a week ago. The other two candidates remain very far behind. Gary Johnson of the Libertarian Party stands at 5 percent and Jill Stein of the Green Party enjoys only 2 percent.

After the previous poll, immediately after the first debate between Clinton and Trump, the Democrats knew secured two percent more voters than the Republican candidate. The Trump claims about women and claimed cases of sexual harassment which became known last week, may have impacted. Of his own supporters, almost half of them believe that Trump does have indeed made sexual advances. 22 percent think not.