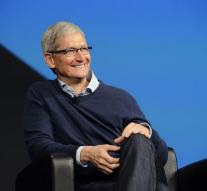 london - A Hillary Clinton mail published by WikiLeaks show that Apple CEO Tim Cook and Microsoft founder Bill Gates were on a list of possible candidates for the vice-presidency of the United States. Besides the two tech icons Clinton would also have considered Michael Bloomberg or Bernie Sanders preferable running mate Tim Kaine.

Tim Cook says both the Democrats and support the Republicans, but he is not really a secret that he stands in the battle between Clinton and Donald Trump behind the former foreign minister. He recently visited with Apple colleague Lisa Jackson a fundraiser for the Clinton campaign. Cook later said that he did not do as Apple CEO.

Apple's name falls in recent weeks arranged in the lobby circuit around Clinton. The iPhone maker wants at all costs to prevent cranking the new president to legislation on encryption. Apple refuses a backdoor to build its software and taking it gets more and more criticism from Washington.