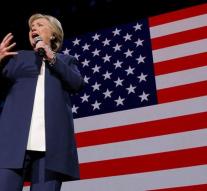 - In her time as Foreign Minister has also accepted by Hillary Clinton Clinton Foundation established a large sum of money from Qatar, while not publicizing. This while Clinton on taking office in 2009 was to sign a contract in which she explained to report large donations from foreign governments to the Ministry. According to a last month by WikiLeaks leaked email from the account of Clinton's campaign manager John Podesta.

By Bill and Hillary established charitable foundation confirmed this week that it received an amount of $ 1 million from the Arab emirate (about 900 000) in 2011. The gift was in honor of the 65th anniversary of Bill Clinton. In return, the Qatari driver wanted to meet the former president. The foundation declined to say whether the meeting has taken place.

In order to be promised Hillary Clinton Minister to disclose when a foreign power donated for the first time or when an already donating state like Qatar, the contribution 'substantially increased'. A spokesman for the foundation met the Qatari donation does not meet that criterion and thus did not have to be reported to the Ministry of Foreign Affairs.

Clinton's Republican opponent Donald Trump said earlier in the campaign that major donors through the Clinton Foundation received priority in Clinton's office. Trump, however, that assertion can not substantiate with evidence.

If Hillary Clinton become president than the Clinton Foundation will no longer take money from foreign governments. This is to avoid any conflict of interest.