Home / World / Clinton demands respect after 'son of a whore ' 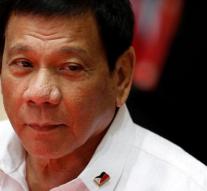 - US Democratic presidential candidate Hillary Clinton on Tuesday said that there should be cooperation or the Philippines, but on the basis of mutual respect. She thus refers to the ruling of the Philippine president Rodrigo Duterte, which President Barack Obama called a,, son of a whore '.

Clinton also said Obama was quite right that he had canceled the appointment with Duterte.

Although the US government was upset about the statements of the Philippine president, this would not have made major damage to the relationship. Because of the tensions in Asia, caused by the extensive territorial claims of China in Asia, the two countries are also forced to work together.


,, What is said is said, but we want a warm atmosphere and an open, strong cooperation with the Philippines, 'said US spokesman Mark Toner.