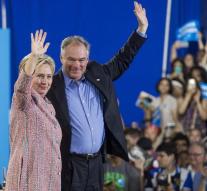 tampa - Hillary Clinton Senator Tim Kaine selected as a candidate for vice-president. The Democratic presidential candidate said this during a meeting in Tampa.,, I am excited to Tim Kaine as my running to announce mate, a man who has committed to fight for others, '' said the politician on Twitter.

Kaine said on Twitter to find it an honor to be Clinton's running mate. He is currently a senator for Virginia, a key swing state in the upcoming elections. He is regarded as a popular politician who speaks fluent Spanish and visiting an African-American church.

As a senator, he focuses more on external relations. Politically, he is more in the middle than other candidates for the post, which were by telephone informed of Clinton's choice of Kaine.


The 58-year-old Kaine was born in Minnesota, but plays his political life on the east coast. He was among other mayor of Richmond, the capital of the state of Virginia. Later he was also governor of the state that lies south of Washington D. C. On his resume also adorns the chairmanship of the Democratic National Committee. In 2008, Barack Obama chose his current Vice President Joe Biden over Kaine.

Saturday, Clinton and Kaine are likely to present jointly at a meeting in Miami. Since the senator can let his Spanish heard in an effort to further increase the enthusiasm of the Hispanic community for Clinton.

The Democrats hold their party congress from 25 to July 28 in Philadelphia.