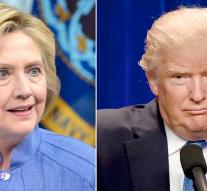 - On the eve of their first televised debate lie Democrat Hillary Clinton and Republican Donald Trump neck-and-neck in the polls before the election for the presidency. Clinton knows 46 percent of Americans behind, Trump can count on 44 percent.

The poll by the newspaper The Washington Post and ABC News television program shows that the registered voters the pair giving the same number of votes: 41 percent each. In the United States, voters must register first before they actually allowed to vote.

The candidate of the Libertarian Party, Gary Johnson remains stabbing in the two polls on 5 and 7 percent respectively. The candidate of the Green Party, Jill Stein is still less, 1 and 2 percent. This pair may not take part in the TV debate. Clinton and Trump occurred Monday night on TV for the dialogue which many Americans look eagerly waiting for.