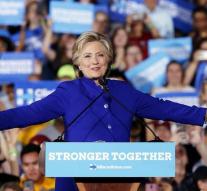 - Hillary Clinton wraps up her election campaign on Monday night in Philadelphia with her husband Bill and daughter Chelsea and fellow party member and President Barack Obama and his wife Michelle. Bill was US president from 1993 to 2001. Hillary hopes to win the post in the election Tuesday 8th of November.

Clinton's campaign team announced Thursday that the 'campaign climax in Philadelphia will be, but it is still not clear where exactly.

Philadelphia is a historic city that was declared American independence in 1776. It is also the largest city in the state of Pennsylvania where political struggle is intense. The first Europeans in the area were around 1630 mainly Dutch, followed by, among others, Sweden and Britain. It is officially the second state of the country now knows next to the capital, Washington D. C. fifty states.