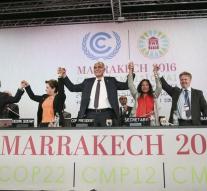 marrakech - Countries affected must be helped by the rest of the world by the effects of global warming. That message of solidarity had almost two hundred countries participating in the climate conference in Morocco's Marrakesh in a statement Thursday.

The statement Thursday was received with applause. The aim is to end poverty, to ensure the food supply and to adapt agriculture to the effects of climate change. ' Our climate is changing is alarming and unprecedented rate and we have to respond to the duty thereon, '' the statement said.

In light of the concerns about the attitude of the new US President Trump opposite the fight against climate change, the countries again stressed their support to the climate agreement in Paris. ' We point out the utmost political commitment in the fight against climate change as a very urgent matter ''. Fear that Trump will withdraw from the agreement.

Friday is the last day of the climate.