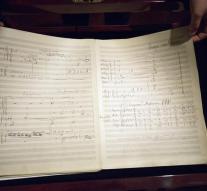 london - At an auction of music at Sotheby's in London on Tuesday the 232-page original manuscript of Mahler's second symphony raised 5.3 million euros. Mahler wrote Aufersteh'n (Resurrection), such as the symphony is called, in 1894. The draft version, the very design of the piece, spent 220,000 euros.

The manuscript of Ludwig van Beethoven Allegretto, a piece for a string quartet in 1817, spent 235 000 euros. The same amount was paid for the original manuscript of the beginning of the first ballad by Frederic Chopin G minor. That work probably dates from 1834.