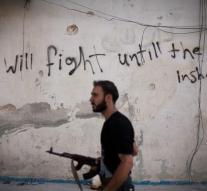 manbij - At least 56 civilians on Tuesday killed by air strikes north of the city controlled by IS Manbij. Which has declared the Syrian Observatory for Human Rights.

Residents of the area believe the bombings were carried out by units of the coalition against IS fights led by the US. Monday came reportedly even though 21 civilians by airstrikes in Manbij region.

US-backed Syrian rebels and Kurdish and Arab fighters began an offensive in May to free Manbij. That offensive was slowed by opposition from snipers and mines. Citizens should not leave the city.