Home / World / Civilian deaths due to air attack on convoy 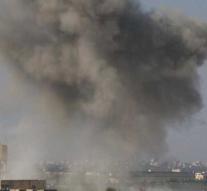 amman - Jet fighters attacked a convoy of refugees in the Syrian province of Idlib, which killed at least seven civilians. The victims are mainly elderly and children, according to aid workers.

The convoy was on the road between Aleppo and Damascus and consisted of people who had fled the battle in the area near Saraqib. There, Syrian and Iran-backed troops are fighting against rebels. In doing so, they receive air support from Russia.

'We think that Russian aircraft attacked the convoy', according to a relief worker. Twelve people were injured among the refugees.