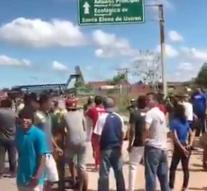 gran sabana - During skirmishes at the border between Venezuela and Brazil, two deaths occurred on Friday. The local population tried to prevent government troops from closing the border.

The incident took place at Gran Sabana. The soldiers were stopped by the indigenous Pemon population and then started shooting, causing two people to die. Fifteen others were injured.