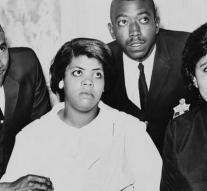 topeka - American civil rights activist Linda Brown died at the age of 76 in her home town of Topeka, Kansas. Brown got the same from the Supreme Court in 1954 that she, as a black scholar, had as much right to education in public schools as white children.

Civil rights movement NAACP, who at the time started the historic lawsuit against racial segregation against the school, praised the contribution of Brown and her family to the 'most groundbreaking statement of the Supreme Court in the twentieth century'.

Brown was at a black primary school more than three kilometers from her home. Her father tried to register her in 1951 at a white primary school a few blocks away, but was refused. The Supreme Court unanimously ruled on May 14, 1954, that racial segregation was a violation of equal rights as enshrined in the US Constitution.