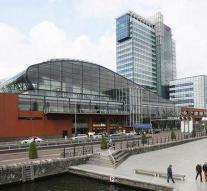 amsterdam - The city council of Amsterdam has agreed on the 'Jump over the IJ' on Thursday evening. This is the arrival of the Javafiets bridge and later the bicycle bridge at the Stone Head. There are coming hundreds of millions for the project, which has to connect North with the city center.

VVD councilors Eric van der Burg, Pieter Litjens and Kajsa Ollongren (D66) were supported by a majority in the city council. Van der Burg promised during the debate the decision to make a pedestrian terminal behind Central Station. Now that bridges over the IJ will appear, the Passenger Terminal Amsterdam (PTA) must be moved. Major cruise ships mooring at the PTA are hampered by the bridges. The new PTA location has not been established yet. Possibly smaller vessels may continue to moor.

D66 councilor Jan Bert Early criticized still critical notes about the late appearance of a letter from Minister Schulz van Haegen, who claims that the bicycle bridges will be more than 11 meters high. That letter appeared a day after the city council had bugged over the plan last week. Schultz van Haegen, Rijkswaterstaat and the province do not see anything in bridges and want to keep the waterway right, especially since recent years have been invested heavily in the IJmuiden seabed. The minister would rather see that Amsterdam chose tunnels, but the city council cut the knot on Thursday and went for bridges. Only the CDA was still convinced of the million project.

VDC elder Eric van der Burg called the position of Minister Schultz van Haegen as a 'light form of witness policy'. Schultz announced, as she announced, the costs incurred for operating the bridges on the city of Amsterdam stories. The minister also holds a bridge height of 11.35 meters. Also, the municipality has to make waiting places, take care of waterway marking and take care of and pay for security measures. She said earlier that the bridge is only good news for the Amsterdam fans of Mont Ventoux.

According to Alderman Pieter Litjens (VVD), contact with Rijkswaterstaat is good and both parties are soon on board.