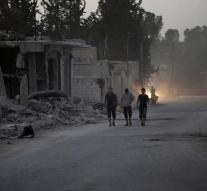 aleppo - An air strike has cost certainly thirteen people living in a village in northern Syria in the hands of terrorist group Islamic State. Dozens of people were injured, reported the Syrian Observatory for Human Rights Wednesday.

The affected village, Thalthana, is located about 40 kilometers northeast of Aleppo. According to the Observatory, it is unclear whether the air strikes were carried out by fighters of the Turkish armed forces and the international coalition led by the United States.