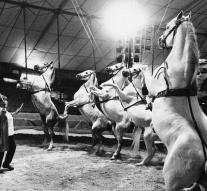 munich - Christel Sembach-Krone, the legendary director of Circus Krone, died in Munich at the age of 80 on Tuesday. From 1956 to 2006 she stood with her dreaded horses in the circus riding school.

From 2006 she continued her work behind the coulissen and focused on her work as a bazin. She had become her mother in 1995 after the death of her mother.

Krone is currently Europe's largest circus, with a tent that seats 4500 spectators. The circus was founded in 1905 by Christel's grandfather, Carl Krone, under the name of Circus Charles.