Home / World / CIA: crown prince is behind murder of Khashoggi 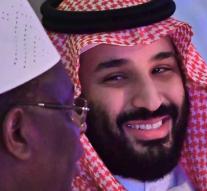 The Washington Post reports this Friday on the basis of sources about the research. Khashoggi was murdered at the beginning of October in the Saudi consulate in Istanbul.

The conclusion of the CIA is at odds with statements by the Saudi authorities. On Thursday, the prosecutor in Ryad reported that the crown prince was not aware of the mission around Khashoggi. The journalist, who worked for the Washinton Post, among others, was a critic of Bin Salman and lived in the United States.