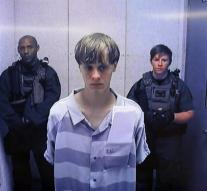 charleston - A US jury has Dylann Roof (22) Thursday found guilty of 'hate motivated crimes.' Roof has confessed that he killed nine worshipers in June last year in Charleston (South Carolina). He must stand trial twice.

The first case, a federal court, mainly revolved around his racist. The nine murders itself is handled at the state level in a separate trial next year.

Roof stormed on the night of June 17 in the church and shot down all those present. Only survived one of the victims. One day he was arrested later. The 22-year-old gunman, who was convinced of the superiority of whites, has stated that he shot his African-American victims because he wanted to unleash a 'race war'. He risks the death penalty.