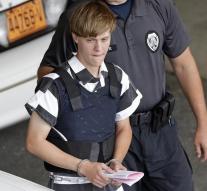 charleston - Dylann Roof, who shot nine black churchgoers in June 2015, just shows no remorse. In fact, he believes that he had no option but to point to the massacre.

That said the mass murderer in court Tuesday. A 12-member jury must decide if he is imprisoned for life or whether he gets the death penalty.

Jay Richardson prosecutor asked the jury to impose the death penalty Roof. 'He had to do it. Those are the words of an extraordinary racist, 'he said.

During four days were 25 different witnesses come to the floor to clarify the background of Roof and events in the church for the jury. Relatives of victims and witnesses of the massacre shared the horrors of that Wednesday in 2015 in Charleston.

'You rape white women. You take over the world, 'Roof cried while his Glock blank shot on churchgoers. Seven times he reloaded his weapon. One of the churchgoers, Polly Sheppard, said a prayer aloud. He told her to keep her mouth shut and spared her life, so she could tell others about what they had seen.

Roof acted as his own lawyer during the trial. He called no witnesses. 'They told me that I can not ask you to give me the death penalty,' he said Tuesday at the jury. 'But I wonder how much sense does. '

The jury is doing these days to rule on the criminal provision.