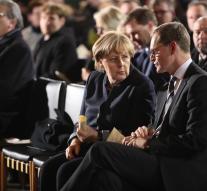 berlin - In the Memorial Church in Berlin on Tuesday at the start of the evening started a memorial service for the victims of the attack in the German capital Monday. Among others, Federal Chancellor Angela Merkel, members of her Cabinet and Federal President Joachim Gauck be there.

The church is next to the Christmas Monday where twelve people were killed by a terrorist with a truck drove into the crowd. Apart from politicians, there are, among others, representatives of the police and fire service in the church.