Home / World / Church burned down in 'the name of Trump ' 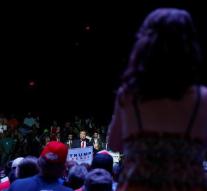 - Greenville, Mississippi, a week before the presidential election a 'black' church covered with paint Voice Trump 'was scrawled, badly damaged by fire. Personal accident did not occur. This was announced by the local authorities Wednesday. The FBI is investigating the circumstances of the incident.

The fire of Greenville, which has 33 000 inhabitants, has no idea how the fire originated in the Hopewell Mr. B. Church. Black faith communities in the southern United States have traditionally preferred a Democratic political sphere.

In October, in Hillsborough, North Carolina, at a firebomb thrown inside the office of the Republican Party of Orange County. On the building next door was the word 'Nazi Republicans leave town or else... 'Liming.