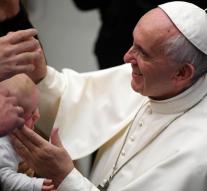 vatican city - Pope Francis thinks Christmas is seized today by blinding materialism that makes many people blind to the needs of the poor in the world. He said Saturday during the Christmas service on Christmas Eve.

'The materialist thought God places in the shade and makes many people blind to the needs of the hungry, migrants and victims of war', as Francis spoke in St. Peter's Basilica. During the simple but cheerful service said the pope standing at about ten thousand audience including many cardinals and bishops that people in the rich world to be reminded that the message of Christ modesty, simplicity and is wonderful.

Sunday Francis speaks on Christmas Day the biennial 'Urbi et Orbi' out from the balcony of St. Peter's Basilica.