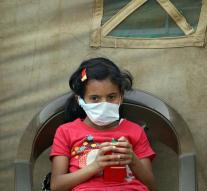 the hague - The cholera epidemic in Yemen is taking ever more serious forms. Since late April, more than 650 people have died of the disease and more than 80,000 people may be infected. Nearly 40 percent of those infected are under the age of fifteen, the emergency organization Save the Children reports Monday.

The health care system in Yemen, which has deteriorated by more than two years of civil war, can not help the outbreak. According to the children's rights organization, the international community must do more. To reduce spread and reduce the disease, almost 60 million euros are needed. Only a fifth of that amount has been collected.

According to Save the Children, there is an urgent need for medicines, clean water and good information. Import restrictions on medical aid should also be lifted and the fighting parties must provide assistance.