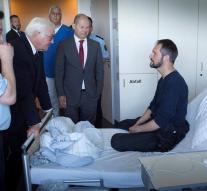 hamburg - German President Steinmeier remains behind the choice for Hamburg as a place for the G20 summit. In reaction to the wave of violence by left-wing activists, Steinmeijer said that fear of protesters should not play a role in the location.

Hamburg has a large group of left-wing protesters, with a violent image.