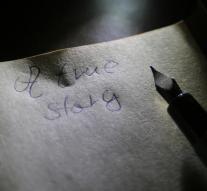 peking - The famous Chinese writer Liu Yongbiao has been arrested as a suspect 22 years after a four-fold assassination.

The 53-year-old author has known the crime and said to the police: 'I've been waiting for you all the time,' said the newspaper 'Sixth Toon'.

He committed the killings with a now 64-year-old friend, who has also been arrested. New methods for analyzing genetic material and fingerprints of the crime scene would have brought the police on track, wrote the newspaper. Both suspects had robbed and killed a guest in a pension in 1995 due to lack of funds. To hide the crime, they also killed the owners of the guesthouse and their 13-year-old grandson.

In a book, the writer announced in 2010 to write a thriller entitled 'The Beautiful Writer, Who Killed', who hopefully would ever be filmed. Liu Yongbiao published several books. A love novel from 2014 was broadcast as fifty-six television series.

According to the China Daily, in a letter he left for his wife, 'I lived for fear of 20 years. I knew that the day would come. '