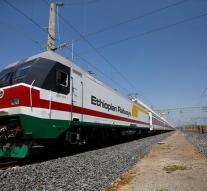 - As of Wednesday, the Ethiopian capital Addis Ababa rail reconnected to the port of Djibouti on the Gulf of Aden. The China landscaped rail of more than 750 kilometers of the first modern electric railway in Africa. The Chinese news agency Xinhua reported that the rail of 3.6 billion euro is crucial for the modernization of the African country.

Ethiopia is 29 times larger than the Netherlands. A major problem is the isolated location. The country is at war with Eritrea on the Red Sea, and the connections to the unstable neighboring Sudan, South Sudan and Somalia are difficult. Djibouti has long been the entry and exit of foreign trade of Ethiopia.

A truck does two days of the ride Addis- Djibouti, the freight train twelve hours. The passenger train going to do about ten hours. Estimated 1,500 trucks put this difficult road daily, for 90 percent of foreign trade passes through Djibouti. When that was French territory, was constructed a railway from Djibouti to Addis Ababa from 1896. Which is worn or destroyed over the years.

The new railway line and almost everything around it is Chinese. The operator is in the first five years of the Chinese construction and railway China Railway Erju. It is also engaged in the training of Ethiopian railway workers, about 2,000 men and women. China has over the past decade to an estimated 18.5 billion euros invested in the East African country. Ethiopia hopes that the railway is only a beginning. The country also wants to build railways in Kenya and Sudan.