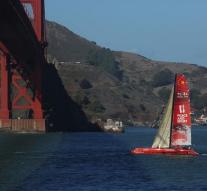 - Chinese solo sailor Guo Chuan, who wanted to go over the Pacific Ocean in a record time, has been missing since Tuesday. The team that accompanies him has it Thursday against the Chinese state news agency Xinhua said. His ship was battered from the air.

Guo departed on October 19 from the US San Francisco and wanted to be in the Chinese port city of Shanghai after eighteen days. Since Tuesday, but there's been no contact with the sailor. He was with his trimaran about 1,500 kilometers west of Hawaii.

During a search with a plane bobbing vessel was seen. The big sail was torn off. The sailor was not seen.