Home / World / Chinese probe landed on back of the moon 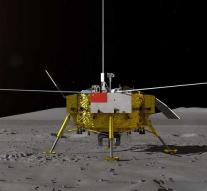 beijing - For the first time a space probe has landed on the back of the moon. The Chinese probe Chang'e 4 has successfully arrived on the moon's surface according to the Chinese state channel CCTV.

China had launched a spaceship towards the back of the moon on December 7th. The Long Mars 3b missile with the Chang'e 4 probe departed from a start platform in South China Xichang.

It is the first time that a country has started such a mission. According to state media, the Aitken crater on the moon is the purpose of the trip. A robot will then examine the area around the site.