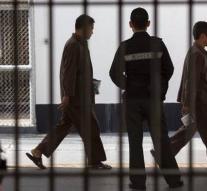 peking - A court in China has sentenced a man to death for the murder of his parents and seventeen others. He used to work in a village in Yunnan last year after a quarrel about money.

According to Chinese state media, Yang Qingpei was angry when he was hired by his father because he wanted to borrow money. He killed his father and his mother. To mask his flight, he killed seventeen neighbors.

The man was detained the next day in Kunming City. He has shown repentance and repentance, but it was not enough to escape the death penalty. He does not appeal against his sentence.