Home / Tech / Chinese 'clone' worth more than Twitter itself 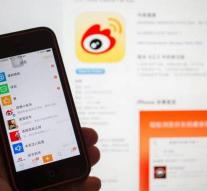 - Chinese Weibo started as a Twitter clone, but now the company is worth more than Twitter itself. According to Tech Asia is the market value of Weibo Since Tuesday, slightly higher than the value of Twitter and it does not appear that the US microblogging service has just returned the lead.

The user numbers are on Weibo much more favorable. there were 70 million new users in the past year. In total, 282 million Chinese use the service. Twitter has 313 million users, although the upper hand, but unlike Weibo lost the right users, some five million in the past year.

Twitter is in the window, but a potential buyer has not yet picked. Google, Disney and Salesforce bought a takeover but they have now dropped all three.