Home / World / Chinese are smoking themselves to death 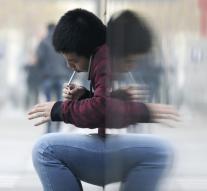 - One in three young Chinese men will eventually die from the effects of smoking. In 2030 would amount to two million tobacco deaths. If there is not something done quickly, increasing that number in 2050 even three million.

According to research from the Oxford University, published in the scientific journal The Lancet.

The researchers analyzed two large studies where a total of 730 000 Chinese people participated. The first study began in 1991, the second in 2006. This is still steeds. From the analysis shows that two thirds of Chinese men before they were twenty start smoking. A third of them will die from the consequences of this habit. Chinese women are just smoke less.

The chance that a woman after 1960 dies from the effects of smoking is less than 1 procent. China is regarded as the world's largest producer and consumer of tobacco. About one in three cigarettes smoked in China worldwide .