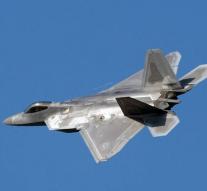 washington - Two Chinese fighter aircraft have intercepted an American military device over the East China Sea. A US Air Force spokesman told CNN on Friday that one of the two Chinese aircraft approached the US device to about 45 meters.

The US Air Force spokesman called China's 'unprofessional' action because of the speed with which the Chinese aircraft flew and because one of them was so close to the American plane. He said that the Americans would express their dissatisfaction about the incident through diplomatic and military channels to the Chinese authorities.

The American plane had flown across the East China Sea to search for traces of a possible nuclear test by North Korea.

China did not want to respond to this incident, the BBC reported. However, the Beijing government has repeatedly accused the US of violating Chinese airspace in recent months. China has called on the United States to significantly reduce the number of exploration flights in the area.