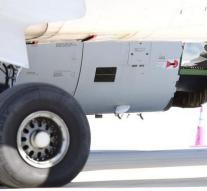 sydney - A Chinese passenger plane was returned to Sydney Airport in Australia on Sunday evening with a gaping hole in the hood of one of the two engines. The Airbus A330-200 was just on its way to Shanghai when passengers heard a bang and smoke a fire.

The pilot decided to return immediately, said Kahy Zhang, director of China Eastern Airlines. Nobody got injured, she said.

The Australian Transport Safety Agency is conducting an investigation, together with Airbus and the supplier of the engines, Rolls-Royce.