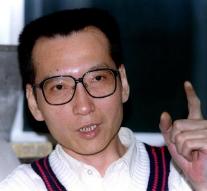 peking - The winner of the Nobel Peace Prize and dissident Liu Xiaobo has died. Liu was recently hospitalized to be treated to liver cancer.

Liu was sentenced to 11 years in prison for 2009 for 'the incitement to overthrow the state power. 'That happened after he had collaborated on a petition known as 'Charter 08' calling for political reforms in China. In 2010, the Nobel Prize was awarded to him.

Germany recently appealed to China to allow Liu to leave the country for further medical treatment abroad. 'We appeal to the Chinese authorities to prioritize the humanitarian aspects of this case and to allow him to leave soon,' said government spokesman Steffen Seibert.

Two foreign doctors, including a German, said last week that Liu was able to travel abroad.