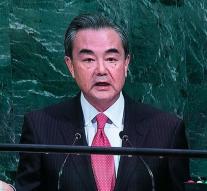 new york - China called on neighboring North Korea not to continue in a 'dangerous direction' with its nuclear program. Foreign Minister Wang Yi said Thursday at the United Nations General Assembly that negotiating is the only way to solve the crisis of weapon development by Pyongyang.

Wang stressed that new nuclear weapons on the Korean peninsula are undesirable, both north and south of the border.