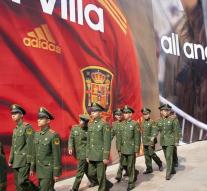 - "The Chinese military wants to work more closely with the armed forces of Myanmar. That said a top Chinese officer during a visit to the Southeast Asian country, state media reported Saturday."

"China is engaged in a charm offensive towards the resource-rich neighbor in April after elections in power since Nobel Laureate Aung Sang Suu Kyi arrived. Beijing always maintained good ties with the dictatorial regime that ruled Myanmar for decades, and follows the ongoing democratization process closely."

"Suu Kyi will visit Washington on 14 and 15 September for a meeting with President Barack Obama. He wants to improve relations with Myanmar in order to counter the increasingly important role of China in Asia."