Home / World / China tackles counterfeit trade on the Internet at 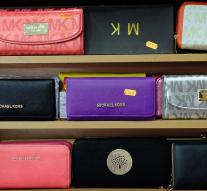 - China 's crackdown on the trafficking of counterfeit stuff on the internet. The government announced Saturday that trade actively combated with new rules and tighter controls. Within three years must have been an end to the sale of fake iPhones and counterfeit Louis Vuitton purses on the Internet.

China has been trying for years to combat the production and trafficking of counterfeit. According to news agency Xinhua last year was more than 40 percent of the stuff online in China have been offered counterfeit or of poor quality.