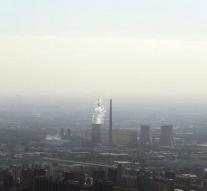 - China's parliament on Saturday ratified the climate treaty of Paris. It reports the state news agency Xinhua. China's ratification is an important step in the treaty yet to enter into force later this year occurred.

The Communication comes at a time that world leaders begin to gather in China in the context of the G20 summit in Hangzhou. The G20 countries are collectively responsible for 80 percent of global greenhouse gas emissions. China is the largest producer of greenhouse gases.

In December, nearly 200 nations agreed in Paris to reduce greenhouse gas emissions and to keep the global temperature rise to below 2 degrees Celsius. So far, 180 countries have signed the binding agreement, but to leave it in force is ratification of the agreement required by 55 countries that together account for least 55 percent of global emissions.


China had 23 other countries have ratified the agreement, but their share of global emissions was slightly more than 1 percent. China has a share of 20 percent.

The United States, after China's biggest polluter with nearly 18 percent of global emissions, is also about to ratify the agreement. President Barack Obama will announce this expected Saturday, after meeting with his Chinese counterpart Xi Jinping.