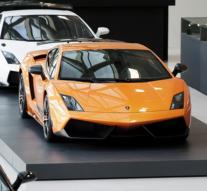 - Wealthy Chinese who wish to purchase a Ferrari, Bentley, Rolls-Royce or other luxury car, to dig deeper into their pockets from Thursday. The government has imposed an additional tax of 10 percent for this type of 'super cars'. The measure aims to promote Beijing 'rational consumption' and reduce harmful emissions.

People who show off their wealth, the government of the country communist in name longer an eyesore. The extra tax is levied on cars converted 177. 000 and expensive.

Although China's super-rich are unlikely to be deterred by the measure, officers and directors have to go look. Simultaneously with the car tax has issued the Communist Party Thursday also new rules that set limits on the kind of cars where government officials allowed to drive around. 'What you demand of others, you must first do yourself and what you forbid others, you must also forbid yourself,' the politburo.