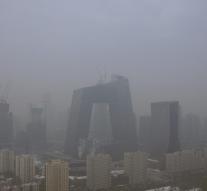 - China on Wednesday announced measures to reduce pollution by power companies. According to state media, the government announced that the country's emissions by these companies in 2020 will have been reduced by 60 percent.

China comes with its commitments on the third day of the climate summit in Paris. There, nearly 200 countries negotiate an agreement to reduce greenhouse gas emissions and thus combat global warming. China is one of the biggest polluters in the world.