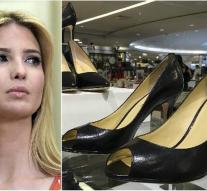 peking - The Chinese authorities released three activists investigating factories where shoes were made for the brand of Ivanka Trump. The trio must still appear before the court, China Labor Watch (CLW) Human Rights Organization reported Wednesday.

In March and May, the trio investigated working conditions at the factories. Two activists went undercover to collect photos, videos and other evidence. According to CLW, they discovered that workers were exploited at the factories. Staff members had to work for eighteen hours a day and received two free days each month.

The police arrested the three researchers at the end of May. The US Department of Foreign Affairs demanded the immediate release of activists on 5 June. It is still unclear where the trio is being suspected of being exact.

CLW stated in a statement to be disappointed in Ivanka Trump. The organization would have sent the presidential daughter proof of the maladies of its suppliers, but never had a response. A spokeswoman for her brand did not want to react on Wednesday.