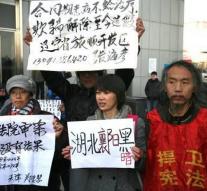 peking - The Chinese authorities released the prominent human rights activist Xu Zhiyong on Saturday. This happened on the day when his dissident companion and Nobel Prize winner Liu Xiaobo, died of liver cancer on Thursday, was cremated.

Xu is co-founder of the 'New Civil Movement', which pursues political change in China. In 2014, he received four years imprisonment for 'public order disruption. 'His condemnation led internationally to great indignation.

Xu, who made a cuddle impression on his release, was 'shocked' by the news of Liu's death. That told his lawyer Saturday in the South China Morning Post. Xu's fans hope that he is really left alone. Some complained about social media that kept guards and agents in civilians at the Xu apartment building.