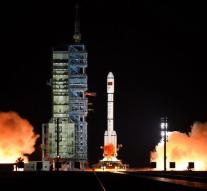 "Should the International Space Station- as planned- stop in 2024, then China would then be the only country that has a permanent outpost in space."