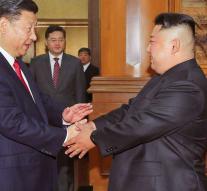 seoul - China seems to be easing sanctions against North Korea after this week's visit from North Korean leader Kim Jong-un. According to the South Korean news agency Yonhap, this happens in the field of aviation and tourism.

Kim was visiting Chinese president Xi Jinping on Tuesday. China had previously called for a relaxation of sanctions, while the US only wanted it after a complete denuclearization of North Korea.

Yonhap reported Thursday that, among other things, a new direct air link will be opened between Pyongyang and the Chinese city of Xian. That is also the birthplace of Xi.