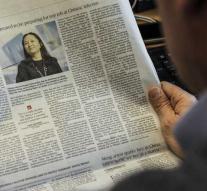 beijing - China has called on the American ambassador Sunday for a 'strong protest' against the arrest in Canada of Huawei top woman Meng Wanzhou. Beijing wants the United States to withdraw the arrest warrant.

America wants to try Meng, the financial director of the tech company, for fraud. She would have allowed SkyCom, an unofficial subsidiary of Huawei, to trade with Iran. In doing so, she violated a trade embargo that the US has filed against Iran and mislead American banks, according to Washington. She was arrested Wednesday in Canada, at the request of the US.

China takes the case high and does not exclude further measures.