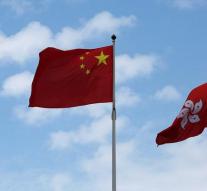 - China's parliament on Monday intervened in Hong Kong. Two activists in the city at their swearing in as a parliamentarian refused to recognize China's authority may not retake their oath according to the National People's Congress, message state news agency Xinhua.

The activists can result in practice more take a seat in the legislative assembly of the city, the local parliament. The duo had while taking the oath provocatively called for independence of Hong Kong.

The activists swore during the swearing allegiance to the nation ' Hong Kong. ' They also carried a banner with them labeled. ' Hong Kong is not China. '' Then the oath of the duo was declared invalid.

Sympathizers of the duo were Sunday in Hong Kong took to the streets to show their support. The case is still before the courts in the city, but to the wisdom of the Chinese parliament seems that case unnecessary.