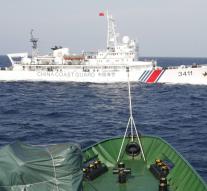 - China does not cooperate in the case against the country who are going to deal with the Permanent Court of Arbitration in The Hague. The Philippines had in 2013 an indictment in areas of territorial claims in the South China Sea. China had objected. According to the country 's court is not entitled to rule on it, but Thursday the court ruled that it does take into consideration the case.

Thursday there was a video conversation between the commander of the Chinese navy, Wu Shengli, and his American colleague John Richardson, Shengli which the US has made ​​it clear that it should stop " provocative actions " in the South China Sea, said the Chinese army. According Shengli there is a risk that " may leak a small incident at war ". The call followed a move by the US Navy. That left a warship sailing through the South China Sea near the Spratly 's. These are artificial islands that China has built. They were underwater at high tide, until they opspoot China in 2014 and turned into islands. The Spratly Islands are also claimed by Vietnam and Taiwan.